As you are all probably aware, London is in the grip of a cycling revolution. By marketing campaigns such as videos of celebrities on bicycles, TfL have found innovative ways to make the cycling modal share in London rocket from 1.2% in 2001 to  1.6% in 2009. At this meteoric rate, London's cycling modal share will be the same as Amsterdam's and Copenhagen's in a little over 600 years. Clearly TfL were right and every city with high cycling modal share was wrong - cycling excellence can be achieved without having to bother with pesky and expensive infrastructure.

But how is the cycling revolution progressing outside London? Is the expertise of award winning councils such as Waltham Forest being heeded outside the M25? Great news! On my trip to Harlow, Essex, I think it is!
Look at this cycle path, pictured below - clearly taken from the Waltham Forest book of great cycle provision. 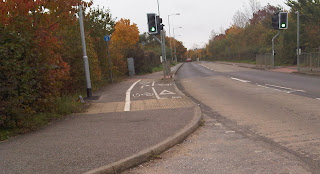 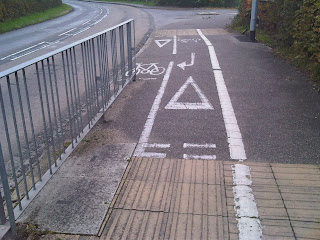 London Road, Harlow
At first sight, this cycle provision, running about 12 feet, would appear to be completely useless whilst being shared with railings and a traffic light. However, this is a misconception - the light coloured ridged tiles are not there just to make it interesting when cycling in the wet, they are actually the landing zone for a Star-Trek type teleporter that whisks the cyclist to the next piece of disjointed infrastructure. Obviously, the teleporter doesn't work as it hasn't been invented yet, but this just shows the far-sightedness of whoever implemented this facility - it is completely future-proofed.
Until the art of teleportation has been perfected, the cyclist can use the cycle path on the other side of the traffic lights. At first glance the lack of lighting on an offroad path in a secluded area may be thought a mistake, but the council have come up with a better (meaning cheaper) plan. Cyclists have their path lit up from the glass shards scattered over the entire length. And this doubles as a useful consumer test facility to see if those new "puncture-proof" tyres really are up to the job!
It is good to see Harlow also taking note of Waltham Forest's creative use of overgrown shrubbery. In Harlow, when the cyclist returns back to the crossing via the cycle path (assuming that they have manage to replace those shredded tyres), they are confronted with this at the end of the path. 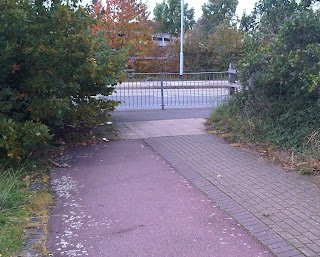 One might falsely assume that obstructing the path as it turns 90 degrees onto a narrow pavement would put cyclists in direct conflict with any pedestrians coming along the other way, and that this would be a bad thing. But Harlow are employing a transportation genius - this is exactly what is intended. Instead of cyclists and pedestrians careering headlong into the road and possibly slowing down traffic by colliding with it, they are slowed by colliding with each other. Soft and squidgy pedestrian hits soft and squidgy cyclist instead of soft and squidgy cyclist damaging expensive paintwork on hard metal car.
I think it is clear from the evidence above that authorities outside London are employing the same tactics for increasing cycling modal share as those used in London. Therefore we can be confident that these boroughs will also enjoy the same spectacular results. Hurray!
Posted by GrumpyCyclist at 23:08