The ups and downs of cycling

Today, I tried out the "Greenway" cycle-route for the first time. I have cycled around this area for years, but never got onto this. I heard good things about it, and decided to try. 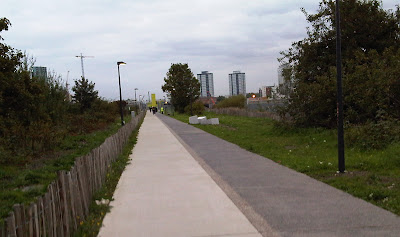 It is great! Possibly could do with being a little wider (the cycle lane is on the left), it might be a bit better if they didn't use some textured paving on some of the joins, and I could swear it smelled a little of sewage (but it may have been my imagination, I knew it was built on top of the sewage pipeline to Beckton). But these are small points - It is smooth and traffic free.


Unfortunately, at the moment, the Olympic works means it terminates in a series of tight hairpins (with Trixi mirrors so some thought given here) and then gets very tight before you are herded by a polite security guard onto a short run to Pudding Mill Lane. The security guard was very patient as I tried to go every way except the correct way - the cycle lane seems to cross a road in the middle of the Olympic Park.


Once the work is completed, I believe the Greenway will run straight through to Beckton's water treatment plant. At the moment, the railway line tunnel is blocked off. How the Greenway will cross the A11 is anyone's guess.


Unfortunately, due to the work, this means that at the end of Pudding Mill Lane the cyclist is once again hurled into a car dominated world as you meet the A11 slip road around here 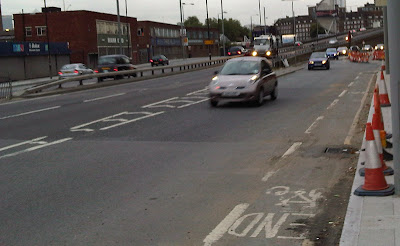 I did think at first I must have missed the cycle route, but, no, several other hardy cyclists continued whilst I was stopped. As can be seen above  a truly world-class cycle lane has been provided for us, to stop, alas, just as the slip road full of fast moving traffic joins the A11 full of fast moving traffic. Once you have fought your way off the slip road, the following scene greets you.. 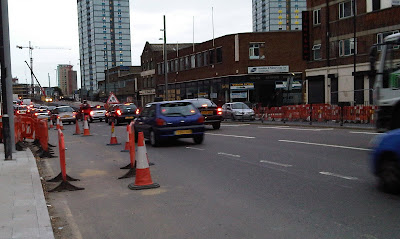 And then it is a mixture of weaving through stationary traffic, avoiding road work paraphernalia scattered with wanton abandon around the carriage way, and asserting oneself as traffic speeds away from lights to meet the next queue seconds later.


It made me almost nostalgic for the "safety" of the Tottenham Hale Gyratory...


Of course there are no signs on this diversion to guide the confused cyclist, how you would get back onto the Greenway from here is beyond my understanding - but would involve crossing a three lane carriage way to turn right.


The Olympic site does actually note this cycle diversion here, but interestingly states that the diversion will last until Spring 2010. Unless I have imagined living through 2010, I would say that this prediction is optimistic. And I did read the diversion document all the way through, but at no point did it recommend that the cyclist may need a change of underpants after negotiating the diversion.


So, in summary, The Greenway looks wonderful - I don't know if the rest of it is the same as the small section I used, but it has great potential. Which will be completely let down if no-one bothers making the local access roads more cycle friendly as well. It is hardly going to entice novices to cycle to the Olympic park  if  you have a great off-road cycle path which is accessed by roads which make your life flash before your eyes. I think I might have mentioned this point previously...
Posted by GrumpyCyclist at 21:42