I am sure that Sustrans do sterling work in the effort to get people to use more sustainable transport. I would be really quite certain that if left just to the great and the good in the councils of Haringey, Waltham Forest and Hackney that the cycle route 1 which is a great off-road route through these boroughs would still be at "discussion stage". No actual route, but plenty of glossy brochures indicating intention.

So this isn't really criticism of Sustrans, who try and make the best of  trying to get local and national government turn rhetoric into action. Not easy unless one measures action as the number of celebrity promotional videos created or the thickness of each sustainable transport policy document generated.

But I cycle this route 1 frequently, and some parts neatly sum up the issues that face utility cycling.

Firstly, I believe that this route is maintained by Sustrans, which is in itself telling. Surely national and local governments should be using transport funds to maintain key cycle routes? I wonder whether we could have all transport infrastructure maintained by charity? But whether Sustrans or not, the fact is that this route through Walthamstow and Hackney marsh is very popular with commuters and leisure cyclists alike, but the conditions can be sometimes atrocious. 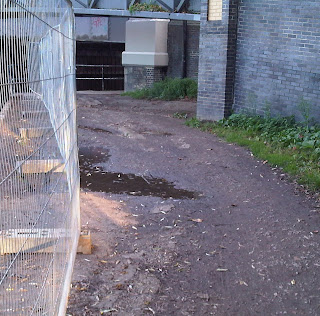 This the path to the underpass for Lea-bridge Road. The alternative is to take ones chances crossing two lanes of heavy traffic. It is widely used by cyclists and pedestrians.

Not only are there puddles, but there is obviously the remnants of a now long deceased concrete path which is really slippy if your cycle wheels go over it. But this isn't the real problem. The real issue is the fence that has been erected in the last couple of days. Without that in place the cyclists could swing left slowly to avoid pedestrians and cyclists coming the other way around the blind 90 degree corner. Now cyclists and pedestrians are forced into each others paths as the fence has narrowed the path.

A neat and simple solution would be to install a convex (Trixi) mirror attached to the fence or railings so that you could see down the underpass as you rode down the path. Or, of course, not put up a fence in the first place, the purpose of which is, and probably always will, remain a mystery. 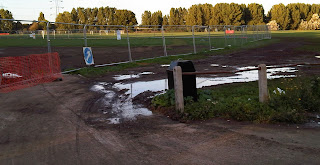 Now, clearly some contractor is doing something in the corner of the playing fields (what they are doing is again left as a tantalising mystery) and has blocked Sustrans 1. This is the diversion for cyclists and pedestrians.

I cannot really believe that city workers would use this route to commute home on a Brompton whilst dressed in a suit. Well, not unless they were really keen on dry cleaning.

And this is one of the many problems. A route such as this that links inner and outer London to the centre without having to use roads would be cherished in other countries and may look like this.


In the UK we have some kind of mud covered obstacle course.
Posted by GrumpyCyclist at 10:26