The Road to Mothercare

So I know that I have blogged previously about Mothercare, that I would never darken their doors again, after they showed complete contempt for anyone trying to get to their store by cycle instead of car.
Clearly, it is fine to have principles but when one has a small child that demands a potty only available from mothercare otherwise she will poo with abandon anywhere of her choosing, principles take somewhat of a back seat.
On the way, the  cycling and walking infrastructure had been improved by someone dumping a lot of stuff next to it and setting it alight. 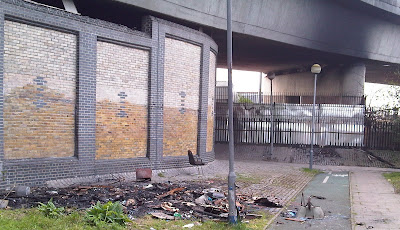 They had even provided a seat, presumably so the weary could rest and admire the vista. 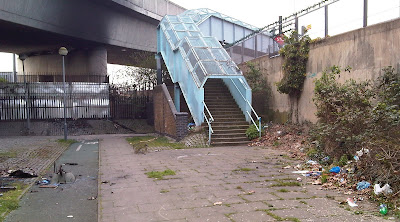 Between the burnt out rubbish, the detritus scattered all along the path and the imposing concrete and barbed wire, the whole scene could be mistaken for a courageous art installation called "urban decay".


When going to Mothercare, I was a bit sad that I didn't have a child seat for the cycle so that the little one could come along. However, Haringey council have kindly stopped any such dangerous nonsense by installing a narrow gate on the off-road cycle path. 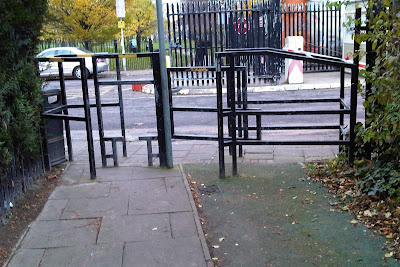 This means anyone with anything bigger than panniers on the bicycle cannot access. Presumably the contraption is designed to stop motorbikes and scooters using the path, but frankly, if the solution makes it impossible for legitimate users to access as well they may have well just put up a brick wall. If I did have a child-seat, or a trailer, or large panniers then I would have to either brave Meridian Way - a "40mph" road that is deeply unpleasant for cyclists - or find another way, or give up completely.
Posted by GrumpyCyclist at 17:05 No comments:

Alexandra road - just when you thought it was safe to take primary...

I have previously written about the "improvements" to Alexandra road in Leyton.
I have to say that I have very low expectations of Waltham Forest council when it comes to cycling, which they consistantly fail to meet.
This is no exception. 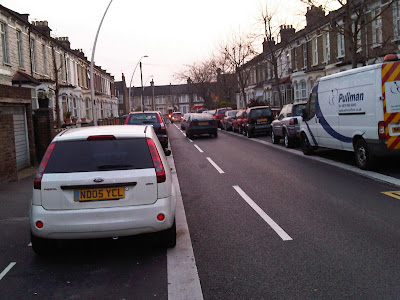 This is now the end result which cost £562,000 (hat-tip to Freewheeler who posted the amount on the comments to a  previous post).
The result appears to have been that the road has been raised around 3/4 inch so that there is no drop between the pavement and road. Presumably so  motorists do not have to worry about damaging their alloys when they park (legally) on the pavement.
The thought given to cyclists consists of the dashed white line one can see to the left of the road. Which runs right next to the parked cars, opening up an exciting world of dooring whilst being past by cars travelling at speed.
I consider myself an experienced urban cyclist who is not a "shrinking violet" on the road. But I certainly didn't have the courage to position myself away from the door-zone and thus prevent close passes by overtaking cars on this road. The traffic volume is simply too high and too fast - two issues that adding some more tarmac has singularly failed to resolve.
This "improvement" above isn't just crap for cycling. It is worse than what was there before, and is actually dangerous whilst doing nothing to make the street more pleasant for anyone that isn't racing round the gyratory in a car.
Posted by GrumpyCyclist at 14:29 No comments:

Clearly, despite the best efforts of various vapid journalists and TV non-entities, cycling seems to be entering the mainstream a little more. Witness more adverts that have a bicycle strategically positioned somewhere in shot. Even car adverts are doing this

And the other night, going past the Porsche garage in Stratford, I realised that even the luxury car market were trying to use bicycles to promote their products 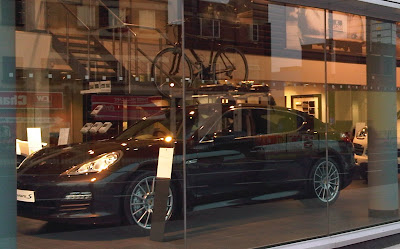 Whether they put a bicycle on the roof to illustrate the practicalities of this new 4 door porsche or whether they were indicating where a cyclist would land up if they got in the way of a porsche driver using the car to its full capability, is unclear.


Isn't it strange? Clearly cycling seems "cool" enough to be used by advertisers (who are  very picky on what they use to promote products), yet it appears to be open season on the people who actually carry out the activity.
Posted by GrumpyCyclist at 11:15 1 comment:

Journalist puts cyclists in their place

Another journalist has decided that cyclists are in need of a good dressing down and being put in their place.


This time Celia Waldon has chosen to take up the baton of cyclist bashing, last wielded by some TV cook whose name no longer springs to mind.


The article finished on the note that there will be many more "boy cycle racers" on the streets as the olympics:


so confident on the roads that they will all be plugged into their iPods, calmly humming "lalalalala" along to Sasha Distel as that articulated lorry indicates left.


Celia Waldon may not have known that 6 cyclists have died in HGV incidents so far in 2011 when she wrote her bon-mots, but seeing someone has since put this fact on her wiki page, she may now.


I should imagine her Pulitzer is in the post.

No room at the inpatients

Some of the more uncharitable E17 cycling blogs think that the local council spout ecofluff about cycling whilst - at best - doing nothing to help cycling in reality. Like this blog here from freewheeler on the cycle stand provision at St James street medical centre. Which is, frankly, just unfair. Local government and NHS trusts would love to encourage cycling to their sites, if only there was the room to accommodate them. After all, cyclists need to be realistic. 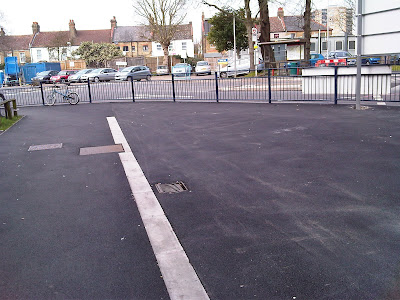 If only there was any room to put cycle provision outside the walk-in centre of one of East London's biggest hospitals, then don't you think the powers-that-be would do so?


As it is, one can just see in the picture above, a typical lawless cyclist deciding to take the law into their own hands and use the railings to secure their cycle. This type of anti-social behaviour is exactly the reason why cyclists should pay road-tax and insurance. And wear silly high viz and helmets. And keep out of the way of motorists.


Those of a cynical disposition should take heed that Whipps Cross website actually discourages travelling by car, saying


"Patients are encouraged not to come by car as there is limited parking on site".


It then continues to detail the 4 car parks on site which can be used by motorists.


Strangely it doesn't detail the cycle parking available at the hospital, instead saying


"We encourage visitors and staff living nearby to cycle to the hospital if possible".


Clearly this encouragement doesn't extend to some sheffield stands near major departments. Presumably encouragement can only go so far.
Posted by GrumpyCyclist at 00:02 6 comments:

I have been away for the last few weeks travelling to a very different place than E17 (and cycling a little bit there as well).


In the meantime, I notice that another budget has happened. One that will be a "budget for growth" (can one imagine a chancellor announcing a budget that isn't "for growth"?!)


For the "and finally" flourish at the end of the speech, the chancellor is knocking off 1p off fuel duty, postponing the 4p rise and cancelling the fuel escalator.


As the BBC reports, the chancellor


.. told MPs "the cost of filling up a family car such as a Ford Focus has increased by £10" and he said he wanted to ease the burden on hard-pressed families.


Presumably there are no hard-pressed families who don't own a car.


It is somewhat difficult to reconcile any government green credentials with this budget move. By keeping the fixed costs of car ownership the same (VED and so on) and reducing the cost of fuel, the move will make the total cost of ownership of a car a bit cheaper but the marginal cost of driving extra mile a lot cheaper. In essence if one owns a car and pays the fixed costs, then the comparative costs of using a car for a particular trip against public transport has gone even more in favour of the car.


It is fair to say that most people won't give up access to a car completely. I certainly wouldn't. And neither should it be necessary to do so to get people using other forms of transport for many journeys - after all, the Netherlands has high car ownership, alongside the best cycling modal share in Europe. But whilst the marginal cost of each journey is cheaper than alternatives, and the roads are geared completely towards the private car, it is unlikely that other transport options stand much of a hope. Either people move away from private transport by wanting to reduce cost or because other forms of transport are more pleasant, quicker, and direct than using the car. In the case of the UK at the moment, the marginal cost of driving isn't enough to get many people to switch and the roads are deeply unpleasant places for non-motorists. Any government campaigns for cycling in the light of this are either cynical ploys at looking "green" or the product of a group so optimistic that they must border on the deranged.


If the government was determined to use fuel as a mechanism for "easing the burden" (even though this is a monstrously inefficient way of targeting tax relief) there is a possibility to lighten the tax load on car owners and also discourage car usage where other options exist. This would be to reduce some of the fixed costs imposed such as VED, but increase fuel duty. This wouldn't penalise people for owning a car (which most car-owners wouldn't change) but would penalise for excessive use (which most car owners could change relatively easily). But then the treasury would be in significant danger of losing revenue - they love the fixed costs because they know people won't get rid of their car completely, and hate the tax on extra mileage precisely because people could more easily save this. In reality most people will continue to spend around the same on fuel as it has been seen time and again that people will use cars more the cheaper they get. So, the government gets a nice headline, but in reality won't have to stomach much, if any, loss of fuel tax revenue whilst finding the perfect excuse to add on taxation at the oil company end. But maybe I am just cynical...
Posted by GrumpyCyclist at 21:28 1 comment: