Ice spy with my little eye...

Something beginning with .... C! 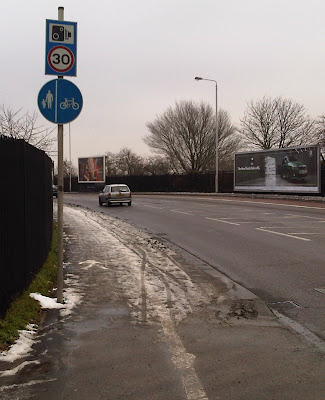 Yes - a cycle path! This was Forest Road yesterday. I did see one brave cyclist try to use it, and it seemed treacherous. He, and I, gave up and used the road instead. Note the 30mph sign in the foreground - possibly the most disregarded speed limit sign in Waltham Forest. I normally use the path as the combination of this bend and speeding cars isn't a good one for a cyclist.

And then - to prove that anything Waltham Forest does badly, Haringey can do even worse - below was the Broad Lane bypass through the little park behind the gyratory. 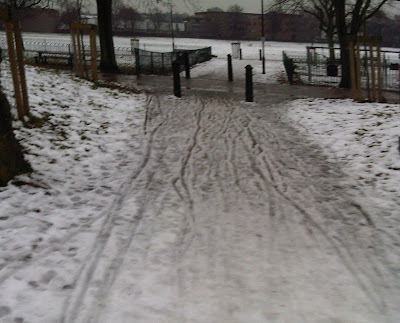 At this point I gave up and walked, which in itself wasn't particularly easy. Cycling wasn't too bad with fresh snowfall, but now it is becoming pretty difficult on paths like these. A little grit and salt would have gone a long way. On the return, I used gyratory, which was so heaving with traffic that I was by far the fastest thing on the road from Stamford Hill to Ferry Lane.
Posted by GrumpyCyclist at 16:52