Freewheeler has blogged a photograph of the cycle cut-through on First Avenue. Well, it is assumed it is the cycle-cut through under the snow.

In a game of Waltham Forest crap cycle infrastructure "top trumps" I see his First Avenue cycle cut through and raise him the cycle "facility" at the Selborne Road / Hoe Street Junction. 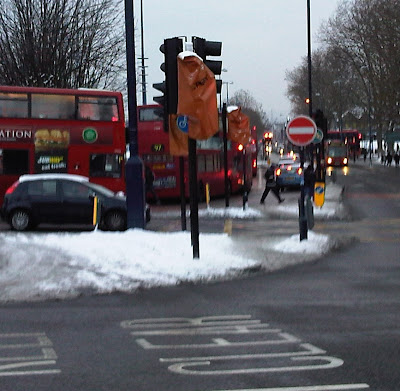 Here we have the bypass that allows cyclists to avoid the little gyratory thing over the railway bridge to get into Selborne Road. It didn't come out in the picture, but there were tracks of a brave stupid cyclist who had attempted to use it. Yes, that stupid cyclist was me.

At first thought having a cycle bypass that is complete icy slush would be a health and safety issue for Waltham Forest and TfL. But this is where we under-estimate the sheer genius of the planners. You see, the cycle lights that used to allow cyclists time to cross the 5 lanes are now hooded - and have been for over a year. So, by leaving the bypass an icy mess, TfL are actually helping cyclists by completely dissuading them using a cycle facility put in (at probably some expense) by them. Therefore preventing the issue of the cyclist being splattered as they try to get through multiple lanes of traffic like some deranged game of real-life Frogger.
Posted by GrumpyCyclist at 16:59