When I need to get onto Seven Sister's road at Broad Lane, I rarely use the main road. Streetview below may give you a clue as to why.

To get onto the A503 you have to cross two lanes of fast moving traffic to get into the right turn lane. This is immediately after the broad lane lights which has five lanes of traffic - of which the middle is the lane for the A503. This road system has two modes - Gridlock or Racetrack, and neither are pleasant cycling.

But I shouldn't worry as Haringey have kindly installed a state-of-the-art cycle bypass. Possibly designed with advice from Waltham Forest. 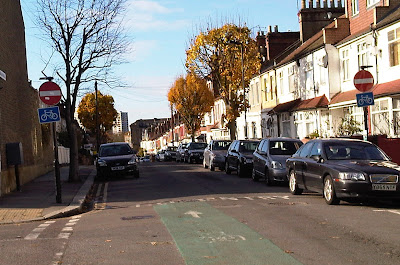 Here we have Crowland Road, a one way system, but allowing cyclists to cycle counter to the one way system. Note the little blue cycle signs, which I don't think are in the highway code to mean access for bicycles, but not to worry. Then we go further down the road to find

No signs to indicate the bypass continues, but I can just make out the faint markings of a bicycle facing my direction further up the road. 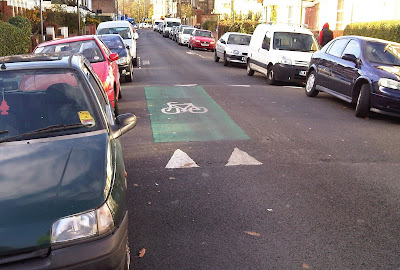 Ah-ha! My suspicions confirmed, this is still part of the contraflow bypass, but the council have decided, for whatever reason, to not label it such on the no-entry signs. 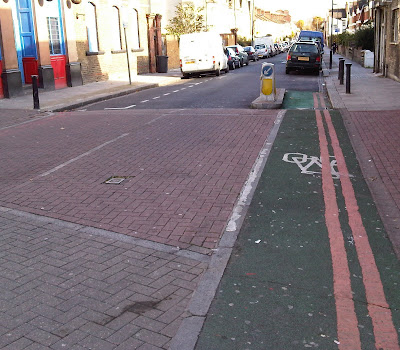 Then at the end of the road is this. Unbelievably, I managed to get a picture of this segregated "facility" in the 5 minutes every year it doesn't get covered by parked cars. Later, on my return, the entrance to the cycle way was blocked by a car, which wasn't really a problem because most of the cycle-way was blocked by a lorry.

The end of the bypass is at the A10 here 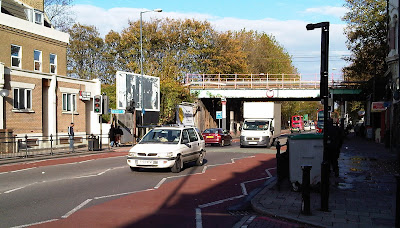 Having got this far, what the cyclist is intended to do now is left a tantalising mystery. The lights you can see are pedestrian and cycle lights, but the pavement on the right hand side has no shared "facility" indication, and on the far side there is one forlorn sign indicating shared use which appears to be pointing in the wrong direction. Maybe Haringey want cyclists to dismount here, walk to the crossing, cycle across the road and then dismount again to push the bicycle to the cut-through, below. 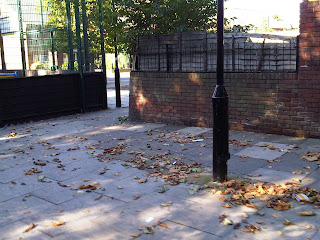 This again has no indication as to its place in the cycle bypass noted on TfL maps - neither does it indicate if you are allowed to cycle through it. You end up in a housing estate near Seven Sisters Underground, and finally emerge onto the A503.

Of course, this route is a mess. There are few or no signs to indicate the way, it is a bit tortuous - involves pavements which may, or may not, be shared space - but are woefully inadequate for the job if they are. And major crossings such as at the A10, the cycle facility completely disappears. Only local knowledge will enable a cyclist to use this route - one which is marked on TfL cycling maps. Sherlock Holmes himself wouldn't have enough clues on this cycle provision to deduce the route without knowing the area.

But, after all that, at least Haringey have put in cycle parking on the A503. Finally, a piece of infrastructure that is so simple it has to be useful. 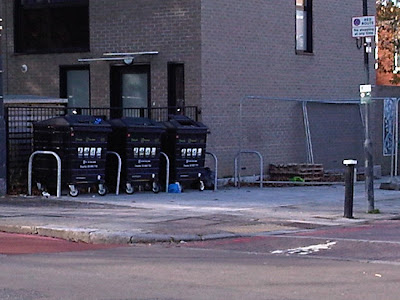 Or perhaps not.
Posted by GrumpyCyclist at 21:33