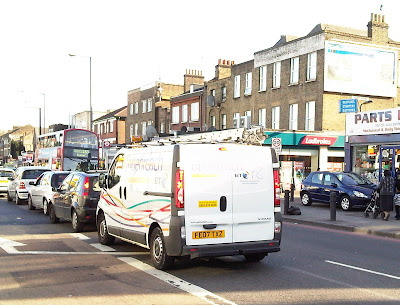 Is BT now classed as an emergency service? I only ask because the driver of FE07 TXZ appeared to be in a desperate hurry along Upper Clapton Road. Maybe there was a telecomms emergency somewhere in East London. Maybe somewhere an internet hub was down and a facebook or twitter page was being left unattended.

Obviously it was something really important otherwise the driver wouldn't have passed me at speed with inches to spare. It was on a narrow piece of road where I try valiantly to stop idiotic passes by taking primary, but clearly I underestimated the idiocy of this driver.

I took this picture a couple of minutes later when he caught up with the back of the traffic light queue. So, I was glad my safety wasn't disregarded for nothing.
Posted by GrumpyCyclist at 00:48