The best option for Central London

I went with the family today to London Zoo. And very nice it was too.

As an automatic reaction, I went via the underground (Victoria line, Northern Line) to Camden Town and then walked to the Zoo. After all taking the car would be monumentally expensive, inconvenient and time-consuming, surely?

Now, here is the interesting part. I looked at the car park for the zoo and, for the whole day, the cost was £13. Even on the meters on the road outside (which you can park at all day on Sunday) the cost was £1.40 per hour. So assuming that I stayed 7 hours, this would have cost £9.80 at the meter, the total cost would have been £47.80 including the two tickets. The diesel would haven't cost very much as it is only about 7-8 miles to the Zoo. All other costs are "fixed" (insurance, VED etc.)

So the train was cheaper because of the saver deal with Network Rail. Otherwise the costs would have been very similar.

Now look at convenience. First thing in the morning, there wasn't much traffic and I expect I could have beat the train to the zoo. Coming back the traffic was pretty horrendous around Camden and I was pleased I wasn't driving. Until I got to Camden station, which is shut on Sunday afternoons between 1pm and 5.30pm because, it would seem, too many people want to use it. Only on our transport system would the solution to overcrowding be for the service to be removed completely. So this meant we had to walk to the bus stop to get the bus to Euston and then the tube home. I couldn't find any details of the closure on the TfL website, although trawling Yahoo answers when I returned seemed to indicate it was a regular occurrence. So, all in all, I think convenience tips towards the car, when one considers that one can go from door-door and pretty much park outside the zoo.

Finally, walking back to Camden, Prince Albert Road looked like this 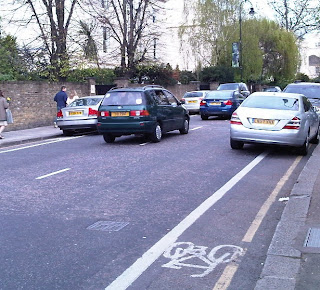 So, only a couple of hundred metres from the zoo was completely free parking. Of course, this blocked the mandatory cycle lane, but this isn't an issue on a Sunday, as no-one in their right mind would want to cycle to somewhere like the Zoo would they?

So there we have it. The best way to travel in central London is the car. Super.
Posted by GrumpyCyclist at 23:33