Getting off my high saddle

In a horrible couple of weeks for cycling in the capital, and what seems to be a concerted rear-guard action by the mayor and others to deflect attention away from the state of the roads for cycling by comments about lawless cyclists wearing headphones, it is difficult not to get really angry.

But, as much as I would love to rant, I thought I would post my thoughts on a really quite well-meaning tweet that apparently got a big backlash from some cyclists this week, and the subsequent blog where the author is confused by the reaction. I wanted to note why I think the tweet got the reaction it did, and why it gave me cause to let out a small sigh.

Firstly, the tweet was by @thecustodysgt and is clearly by a member of the police, but tweeted in a personal capacity. The tweet that caused "offence" was 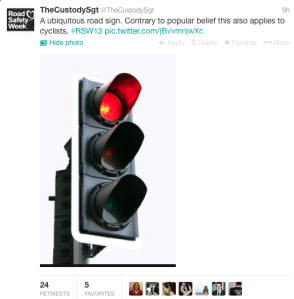 After what appears to be somewhat of a backlash on twitter, the author put together a blog post, found here in which he felt that he tweeted many road safe messages for both drivers and cyclists on offences commonly committed by both but it was only cyclists who got offended. And I can see why it might sound like cyclists are a thin skinned lot anxious to defend law breaking. And I want to put down my thoughts as to why this might elicit the response it did (and make me sigh slightly).

As a reference to motoring tweets he chose the following on the blog. 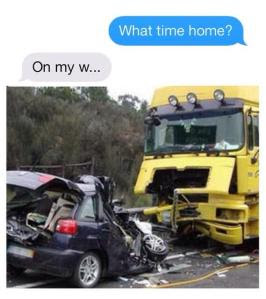 Now both tweets don't feel offensive to me as either a driver or a cyclist. Both are clearly published with good intentions And one has to always bear in mind that twitter isn't really the best place to gauge the general reaction of any particular community to anything.

But here is the first thing. The tweet on cyclists seems to send out a bit of a subtext that isn't present in the second. Try taking the text from the cycling tweet and moving it to the texting tweet; it would read something like "A ubiquitous law. Contrary to popular belief the ban on texting also applies to car drivers". Sounds like there is possibly a bit of a subtext running through this? Maybe that car drivers generally ignore this law? That maybe car drivers have a popular opinion that the law doesn't matter?

Now take the second tweet - a powerful one that doesn't have much of a subtext other than texting and driving is dangerous. It isn't even really targeting car drivers, it could be the lorry driver was texting. It certainly isn't giving the inference that there is a popular belief that texting whilst driving isn't applicable to them.

Now this all might sound a bit thin-skinned. Maybe I need to be a little less precious. But consider it in conjunction with two weeks where there has been six fatalities, some of which on routes I regularly cycle. That my wife is currently clearly worried about my cycling and that I am also becoming jittery about the roads I need to use. Realise that I see the fatal accident boards on my commute. And then understand that the reaction in the press and, indeed from people who are in power and should know better, is to link these deaths with traffic offences which appear to bear absolutely no relationship to the cause of the collisions.  Then imagine reading the comments sections under press articles where the level of vitriol  is difficult to comprehend when they are simply about a mode of transport. Comments which go from blaming cyclists because they break the law to ones that say cyclists deserve it to ones that actually say we are scum because we might decide to pedal to the shops and sometimes we die in horrible collisions.

Imagine if, after a series of terrible pile-ups such as on the M5 a few years ago or the Sheppey Bridge one more recently, the Mayor said that motorists who play music too loud are a scourge and should it should be banned because they cannot hear traffic, even if this wasn't a contributory factor in any of the pile-ups. Imagine that the press ran headlines asking "Even after these deaths" why do motorists still want to speed, tailgate, floor it through amber lights and park in dangerous locations even if none of these violations were actually material to the deaths? Imagine if these articles had comments that said motorists deserved to die as loads drive like suicidal maniacs, think they own the road, and park outside school gates and on zebra crossings. Would this not, as a motorist, make you feel pretty pissed off?

Well this is what I feel like as a cyclist at the moment. A whole bunch of cyclists die in horrible accidents and the backlash from all quarters is simply amazing. And all I want to do is use a convenient way of doing my fucking shopping and getting a bit of exercise. Yet it appears that this is viewed with a suspicion and distrust normally reserved for anti-social criminals.

So the tweet, in itself, may have only been slightly oddly worded, and the reaction might appear to be out of proportion. But consider it against this backdrop and maybe the reaction can be understood in the context of recent events.