I was travelling by bus today and passed Drapers Field in Leyton.

At the beginning of 2012 I wrote a post about how this field - heavily used by local schools and teams for football, cricket and other sports - was going to be closed and concreted over to act as a storage area for the Olympics. The field is just around the corner from the Olympic village.

From memory, and with reference to this newspaper article, the field was closed in September 2011 and transformed from this 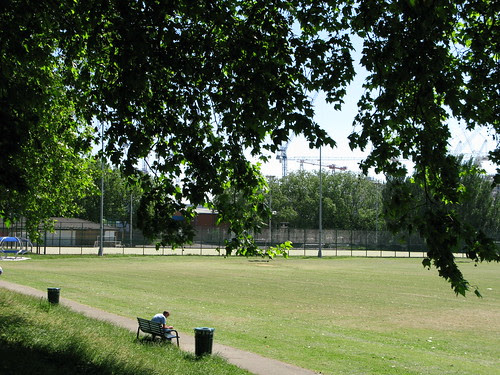 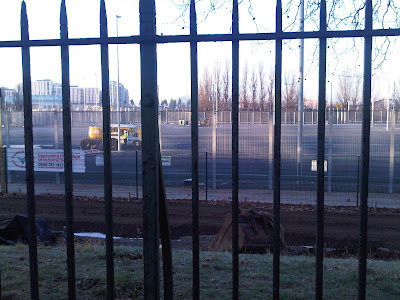 Now, the plans and news reports had the closure lasting 18 months - in fact the news report linked above has the time the ODA would have the facility as from Sept 2011 to Sept 2012.

Going past the site today it was obvious that it still is under redevelopment. There is a football pitch with floodlights on the far side, whilst the rest of the field is full of earth moving equipment and mud.

After a bit of googling, I got to a notice on the Waltham Forest website which says that work is starting on Drapers Field in May 2013 and due for completion in early 2014.

From the council website it might be inferred that the work was awaiting funding from the Olympic Legacy Committee. Maybe this has delayed the transformation back to a local facility. Whatever the reason, this field has been closed to the schools, sports teams and locals for around a year longer than first discussed when the decision to close it was finalised.

In truth it doesn't matter why it has been closed for this time. It is simply a bit sad to see a rare piece of green open space that was clearly extensively used being removed from public use for so long. I could think up some sarcastic, ironic comments about Olympic legacy, but really it is just simply a bit depressing.

I hope the new facilities compensate in some measure and that the field can be seen as part of a legacy of sports facilities for the local area.