The tarting up of the streets of Leyton and Leytonstone for the Olympics is now well under way (Waltham Forest use the phrase "improving the streetscape" instead of "tarting up" but I suspect you get the general principle).

Pavements are being dug up around the area such as this area of Leytonstone High Road. 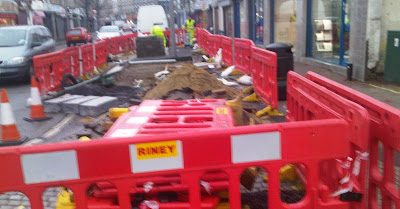 This "improving the streetscape" has been in operation for a little while, and appears to consist of the council digging up the pavement, installing expensive stone blocks in attractive patterns, and then allowing cars to park on the result. Here, in true Blue Peter fashion, is one they made earlier... 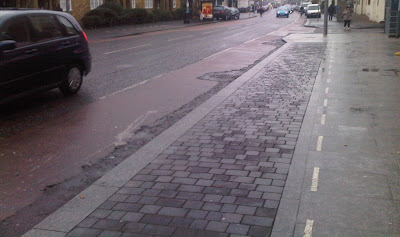 One can see the nice arrangement of stone blocks just waiting to be covered up by parked cars. I have to say the whole effect of "improving the streetscape" is somewhat undermined for me by the globs of uneven tarmac scattered along the edge of the road. And yes, dear reader, you are right to assume that the bits of uneven red tarmac with the liberal smatterings of  potholes and jutting out kerbstones is the cycle lane. Inviting, no? Waltham Forest may be planning on re-surfacing the road, but I wouldn't bet my house on it.

Meanwhile, the roads which have had this treatment for a while appear to be causing motorists some confusion. Consider this 4x4 parked in Wood Street the other week. 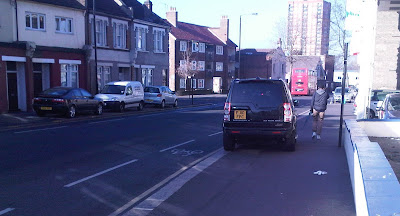 A CCTV enforcement car was taking some interest in it as it is illegally parked on the pavement. But on the other side of the road the cars are legally parked on some of those fancy stone blocks which have been installed for around six months. In fact the gap left for pedestrians by some of the legally parked cars on this road is less than the gap you can see between the 4x4 and the wall. There were spaces behind the cars on the other side of the road for the driver of the Land Rover to park. Maybe the driver is exceptionally lazy and couldn't be bothered to cross the road (there are no crossing points for pedestrians anywhere near, but that is OK since the building on the right only houses a popular indoor playcentre - so no need to help families with young children surely?). Or maybe the driver saw all the pavement parking along the whole length of this road and didn't understand that this is only OK if the car is parked on some expensive fancy stones as opposed to everywhere? Who knows?
Posted by GrumpyCyclist at 20:03