Ruminating on the year just past, I remembered the "Tour De Danger", and the two deaths on CS2 at Bow roundabout which happened just before this event.

The pressure from the media and the London assembly prompted TfL to say that they were going to review all SuperHighway junctions and report back on the bow roundabout as a matter of urgency. This was reported on 18th November 2011.

Has the urgent report been compiled and delivered yet?

What I have seen are a series of large yellow notices asking Drivers to be nice to cyclists, and for cyclists to try to avoid traffic. Such as this one below 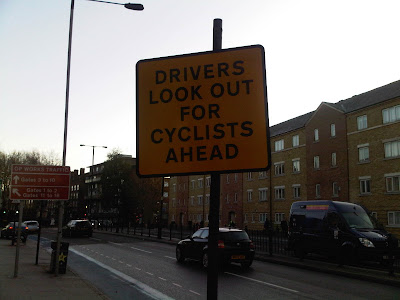 I am not really sure how effective the signs are going to be. Especially this one, which had been twisted around to face the pavement. As a cyclist using this road, I might prefer a lowered and policed speed limit whilst the design is considered.
Posted by GrumpyCyclist at 21:50