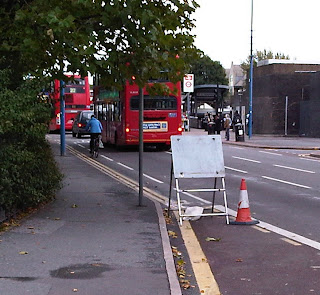 The road contractors who are resurfacing Selborne Road / Hoe Street have added an element of excitement to cycling up this long and slightly tedious road by placing unlit obstacles in the cycle lane.

In case one is getting complacent cycling up this road, you now need to swerve out into traffic more concerned with making it past the lights at the bus station than your welfare. And, of course it has an additional useful function in completely blocking off the filter lane to the ASL when the traffic is tailed back at the lights. Which is more often than not. After all we can't have those pesky cyclists making progress when legitimate road-tax paying  drivers are stuck in a traffic jam. And not just any traffic jam, but one that is caused by buses wanting to turn in and out of the station.

This is not the only road work sign placed in a cyclist's path at these road-works. Signs have been scattered with abandon on the pavement and cycle-lane.

I have reported these issues to the Waltham Forest Hotline. Judging by the response from previous reports, I will be surprised if anything is done before the work finishes in four weeks time anyway.

Still, at least the added danger and inconvenience to cyclists is more than offset by the important message imparted by the sign.
Posted by GrumpyCyclist at 15:58